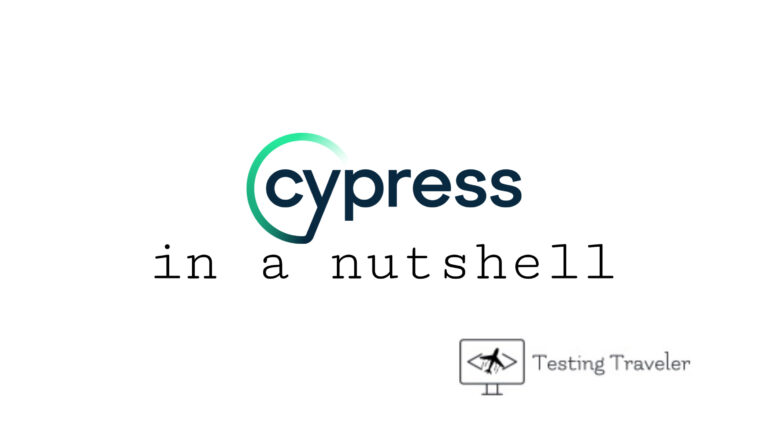 In this tutorial, we will get some information about End-to-end testing, Cypress Test Automation Framework, and even we will use it in the example.

What is E2E Testing? End-to-end testing is a type of testing in which we test business processes (user journey) from start to finish under production-like circumstances.

The most advantage of E2E testing is for instance that ensures Complete Correctness & Health of the Application. Moreover, it can also increase Confidence in the Application or even reduce Future Risks. In addition, it also reduces the risk of repetitive efforts.

Besides advantages, E2E testing has also disadvantages. One of the most disadvantages is that E2E tests take longer to run depending on how we have written the test. Tests also require regular maintenance.

We can execute End-to-end testing manually, however, we can also run automated test scripts. In this tutorial, we will execute an automated E2E test script.

Selenium is the one of oldest test automation frameworks. It provides packages for various programming languages such as Java, Python, C#, Ruby, Javascript, etc. Selenium has a wide range of functions that help you simulate almost every action that a user would perform. If you want to learn more about Selenium, you can take a look at this tutorial.

Cucumber focuses on behavior-driven development (BDD). We can build a product by considering the perspective of different stakeholders for instance developers, QAs, customers, etc. The main reason for Cucumber’s popularity is its simplicity.

Cypress is another framework that has made the life of testers much easier. It reduces the problems faced while using Selenium by using a different architecture than that of Selenium. In this tutorial, we will tell ourselves more about Cypress.

As we’ve had an occasion to say that before, Cypress is an end-to-end automation testing framework. To create the tests in Cypress we’re using Mocha which is a JavaScript programming language framework. Cypress makes asynchronous testing simple and convenient. It also uses a BDD/TDD assertion library and a browser to pair with any JavaScript testing framework.

How does it work?

In this section, we will see how Cypress works.

Cypress provides us a test script runner which is presented as a visual interface. It indicates all tests and which all commands are run, passed, or failed. We can test highly interactive applications and perform different tests such as manipulating the DOM, asserting that if some element is available, present or not on the screen. We may test also reading or writing data into or from fields, submitting forms, and even redirecting to a different page without actually making direct modifications to your code.

As we know how Cypress works, it’s a good time to see the advantages and disadvantages. It will help us to make a decision if we want to use Cypress in our End-to-end testing process, or maybe we want to choose another E2E framework.

As we’ve decided to use Cypress in our E2E automation testing process, we need to install it on our machines.

I’ll use macOS operating system in this tutorial, so if you have a Windows operating system don’t worry. I will show you how to install Cypress. All rest will be a work in IDE so it doesn’t matter what kind of OS are you using 🙂

First, we need to open a terminal and enter brew update for macOS.

Once our brew has been updated, we can enter the brew install node in the terminal.

Once our Node.js has been installed, we may check the version of node and npm (installed with node) by using commands: node -v and npm -v. We should get the following output.

Don’t worry if you’re using Windows OS, you can simply download and install node.js here. To check the version of node and npm on Windows you need to enter the following commands on Command Prompt: node -v and npm -v.

We should get the following output.

If you’re using Windows OS, you can simply download and install Cypress here.

As we can see in the last screenshot, there is a command which allows us to open Cypress. Indeed, it is a command that we will use to open Cypress Test Runner. Let’s enter this command in the terminal: node_modules/.bin/cypress open (in Windows OS it can look a bit different).

Cypress runs tests in a unique interactive runner that allows you to see commands as they execute while also viewing the application under test. We have here one testSample file to see how the test runner works.

Let’s run the testSample and see what happens upon clicking Run 1 integration spec.

Now we can write our first test script but before we will do that, it’s worth explaining the folder structure.

This what we wrote just now is the simple test script, which allows cypress to visit the website.

Describe as the name points, describes the name on the main test (user journey). It describes the test which is the specific phase of the user journey. cy is the shortcut of cypress then we put . and command visit to tell our script that we need to visit the website, in that case Testing Traveler website.

We can run our script in the test runner.

We can also execute the same test in the IDE terminal upon clicking the Run icon.

When we create the test scripts, it’s nice to have a list of useful commands.

.and() – Create an assertion. Assertions are automatically retried until they pass or time out.

cy.contains() – Get the DOM element containing the text. DOM elements can contain more than the desired text and still match

cy.get() – Get one or more DOM elements by selector or alias

cy.url() – Get the current URL of the page that is currently active

cy.log() – Print a message to the Cypress Command Log

cy.clear() – Clear the value of an input or textarea

cy.type() – Type into a DOM element

cy.focus() – Focus on a DOM element

cy.focused() – Get the DOM element that is currently focused

If you’d like to find more interesting commands, you can find them here.

So, we’ve installed Cypress, we wrote and executed a simple script. We will not do more complex user journeys because it would be to much as it is only a Cypress in a nutshell simple tutorial. Let’s take a look at the example of a simple user journey below.

Our user visits the TestingTraveler blog, then opens an article. When user have read an article wants to share it. Then user leaves a reply and closes the website.

When we want to write a script, it’s a good idea to plan it first. So we’re creating a simple test steps, that are presented below.

As we can see it’s a simple user journey and now we will create a simple test script to cover this journey.

We will run this test in the Chrome web browser.

As we can see, Cypress is a really powerful End-to-end automation testing framework. If you know a JavaScript programming language it’s more than better to use that. In this tutorial, we’ve had an occasion to get some information about E2E testing and Cypress. We could also install and perform the E2E testing example using Cypress.

I hope you’ve enjoyed the article and found some inspirational information.
The next post will arrive soon 🙂